First, I have been doing some raytracing programs on my own.
They have their own web pages, so I'll not cover them here. These helped me understanding how raytracing works, thanks to sensei Warp. :)

See the POV-Ray official site if you are new to POV-Ray.

Much like everyone else probably, I started doing spheres. Lighted as beautifully as possible.
Warp was helping a lot in my many questions. 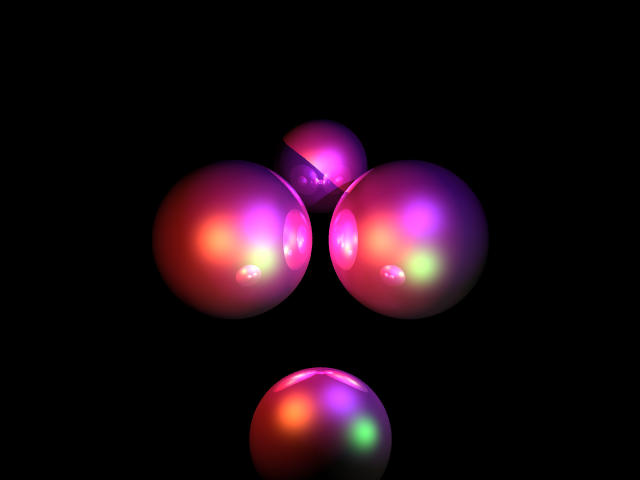 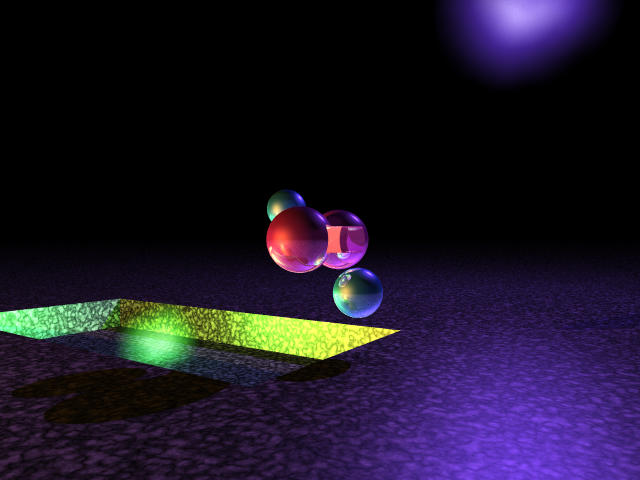 These are not very skillful as you can see, but it was a nice start anyway.

Unowns are mystical lettershaped Pokémon creatures in the Pokémon universe.
In Pokémon 3 the movie there's a scene with thousands of Unowns swirling in magical looking spirals and circles, shaping the reality.
This looked very cool.
I wanted to make a similar scene. 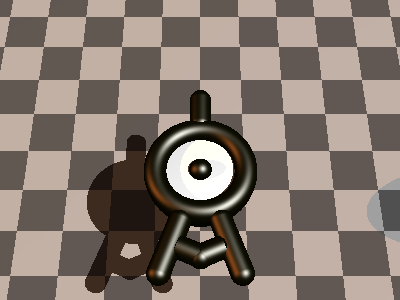 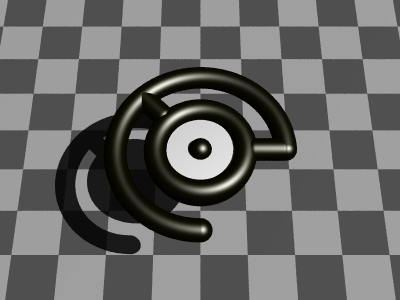 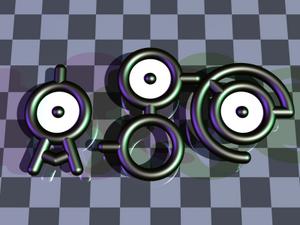 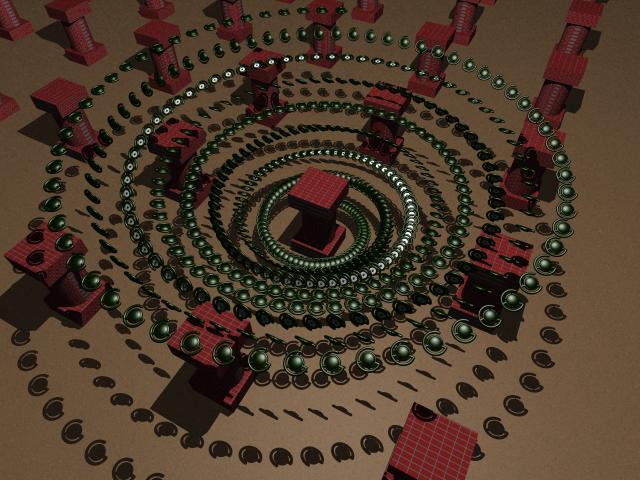 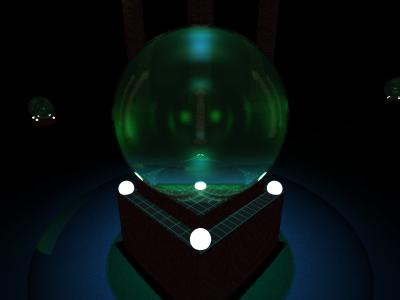 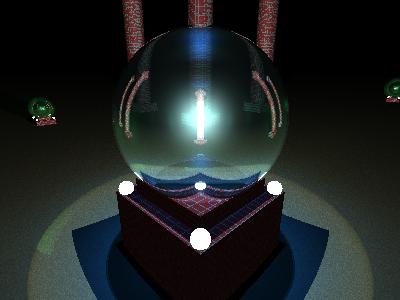 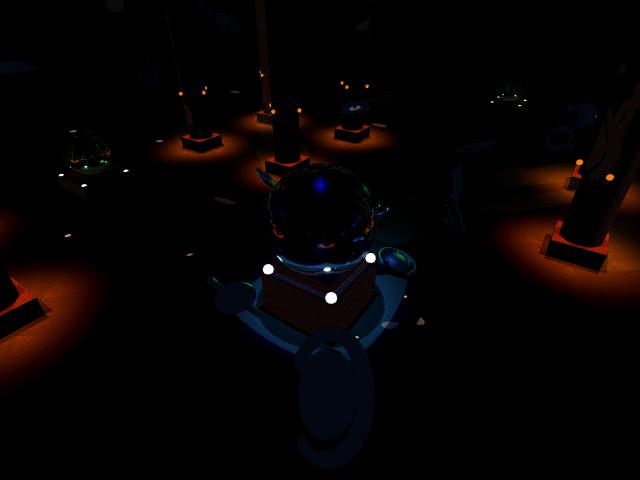 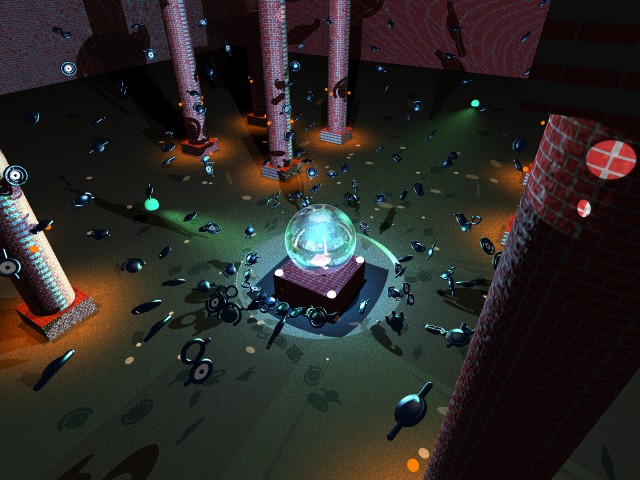 So here I started with animations. There are several more images and two 1-2 MB avi files in the directory.

One thing I noticed: It is quite difficult to ensure no collisions happen when objects are moving.

In Final Fantasy V, there is an ancient highly technical (but sort of weird) place that has funny music.
You can listen to it here (64 kB SPC file).
So this got me an idea.
First I made a mathematical map of the music, to synchronize the video with the music and to invent meanings for all sounds.
The map consisted of items like this: I syncronized the povray clock with the music clock and set the clock/framerate to sync with commandline.
The images above are from the game, but these are mine: 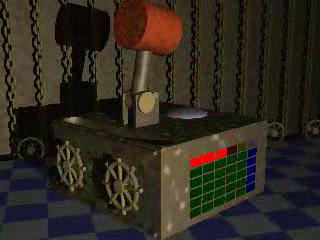 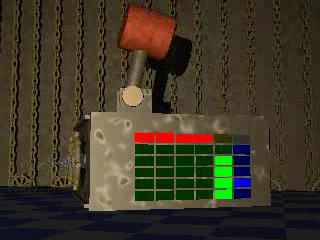 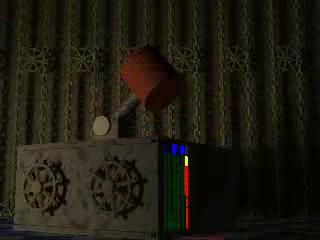 For some reason, I just wanted to make a bell object. Be it liberty bell or church bell. 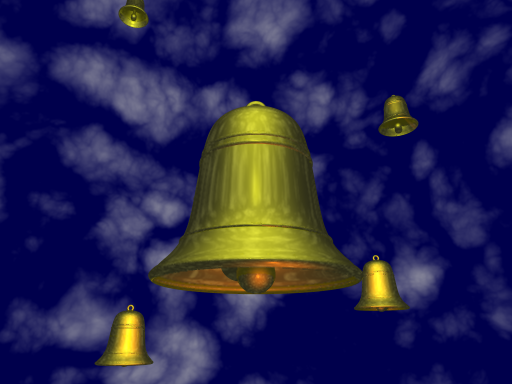 This was the first time I have used the povray standard includes and the sky_sphere statement.

<Warp> Now that you have made a church bell, you only need to build a cathedral around it.

Just a simple radiosity demonstration.
Admitted, this is a bad demonstration. Somewhat cheating.
As the second image shows, the extraluminar pillars are actually light sources. They light almost the entire scene. They just are not defined in the standard way.
The radiosity feature of POV-Ray is intended to give depth to the image (indirect lighting), but it can be used this way too.

I wanted to parse Descent (PC game) level 1 map and render it using POV-Ray. This is an animation. The flying route is automatically and randomly generated.

Updates:
2003-04-11 by Bisqwit You may copy these images (given that proper credit is given), but don't link to/embed them at your pages. This is my server, and I can't afford serving images for other people's webpages.