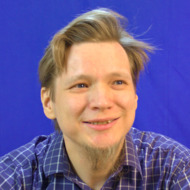 And various other, including military service (11 months), newspaper delivery, ISP server co-administration, and practical training in various fields of work.

I love teaching and instructing people. Nothing delights me more than to see a person grasp a new thing after I have explained something clearly and patiently. As a person I am honest and frank. I like to approach each person as an individual, and I usually get along well with old and young people alike.

I am an experienced programmer in a multitude of programming languages and a few microcontroller platforms, such as AVR, PIC, 6502, and Z80, and I have twenty years of experience of using relational databases such as MySQL in commercial products. I also enjoy reading source code, and take pride in being good at that. I particularly enjoy C++, and like to keep up to date with the newest standards. Some other keywords that define my expertise: C, git, gcc, bash, nasm, ffmpeg, clang, Linux, Debian, xterm, MCU, hex editor, reverse engineering, x86, 6502, asm, concurrency.

I devote much of my free time to developing and exploring software and software technologies. I am a hobbyist Linux hacker, as well as a Nao robot developer. I’m a free software enthusiast (as per Free Software Foundation definition of “free”).